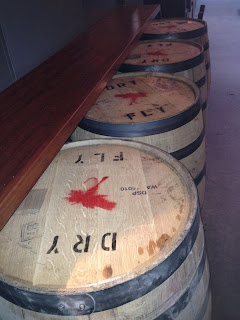 Awhile back we had an idea during an event we were doing with Dryfly out of Spokane.  The wheels were set in motion, a few barrels landed here in early April and we went ahead and sent them out to some local breweries to age a beer for Bigwood in.  Well Bigwood starts on Thursday, December 6th at 11am when we open, and this will be the first chance for all of us to try the five special beers . The breweries and beers aged in Dryfly Wheat Whiskey barrels are:
Big Time—–Old Sol Wheatwine
Elliot Bay Lake City—–No Doubt Stout
Fremont—–B-Bomb
Elysian—-Split Shot Espresso Milk Stout Stout
Black Raven “Mr Kitty” Blueberry Pale Ale on Nitro

We are glad to have these exclusive beers in addition to all of the other great beers!