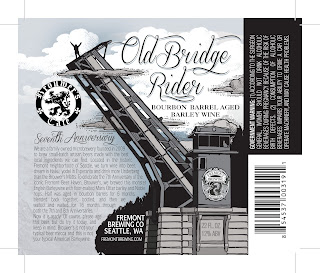 Today, is the release of our 7th Anniversary Old Bridge Rider Barleywine brewed by Fremont Brewing, in wax dipped bottles, at Bottleworks (1710 N. 45th st Suite #3 in the Wallingford neighborhood).  They open at 11am.  The image above is the label.  There is a bit of a story behind this bottle release, if you are thinking “didn’t they just have their 8th Anniversary?”  You are correct.  We made this beer with the intention of releasing it last year, but then just felt that it wasn’t quite ready, so we waited and waited and waited and finally the collaborative minds here and at Fremont Brewing decided that it was ready.  Today is your first chance to purchase bottles of this delicious barleywine at Bottleworks….it will not be on draft, only available at this time in bottles, we have a few kegs stashed for later dates.  We invite you to stop by Bottleworks and pick up some bottles to age and drink now! This is the last Tuesday in April, and we have 3 more beers that we are pulling from the Cellar for your imbibing pleasure.  With out further adieu here they are:
Great Divide Chocolate Oak Aged Yeti
Deschutes Abyss ’11
Fort George Roses on Roses
We would also like to let you know that some how we still have Stone Double Bastard and Deschutes Black Butte XXI still on draft as I am typing this…no telling how much longer they will last, but as of this moment they are still on tap. 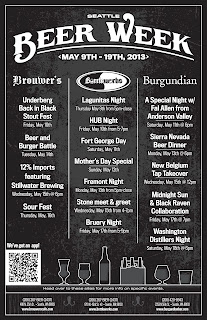 For those of you that need a reminder Seattle Beer Week is just around the corner, the celebration of all things beer in Seattle kicks off next Thursday, May 9th and runs through Sunday, May 19th.  We have 4 events during the 10 day celebration here.  They are as follows:
Underberg Back in Black Stout Fest, Friday, May 10th, starts when we open the doors.  Its just like it sounds we replace just about every tap we have with some delicious stoutsaround the world.
Beer and Burger Battle, Tuesday, May 14th.  Starts when the doors open, we are asking the brewers to be here by 5pm at the latest.   The formula is simple, each brewery designs a burger centered around beef patty, and brings 3 to 5 special beers, after that the sky is the limit.  We have had breweries bring in Voodoo Donuts to be used as the bun.  We have some really delicious options that will be available this year.
The returning champ is 21st Amendment and the contenders this year are Big Time, Double Mountain, Maui, Green Flash and Snipes.  The winner is determined by highest sales.
An Evening with 12% featuring Stillwater.  12% imports, importers of Evil Twin, Hof ten Dormal to name a few will join us.  We will have 8 draft total a couple of offerings 4 from Stillwater, and other offerings from Evil Twin, Hof Ten Dormal and De Dochtor.
Everybody’s favorite Sour Fest, Thursday, May 16th, starts when we open the doors at 11am.  We replace as many taps as we can with a sour beer for your imbibing pleasure.