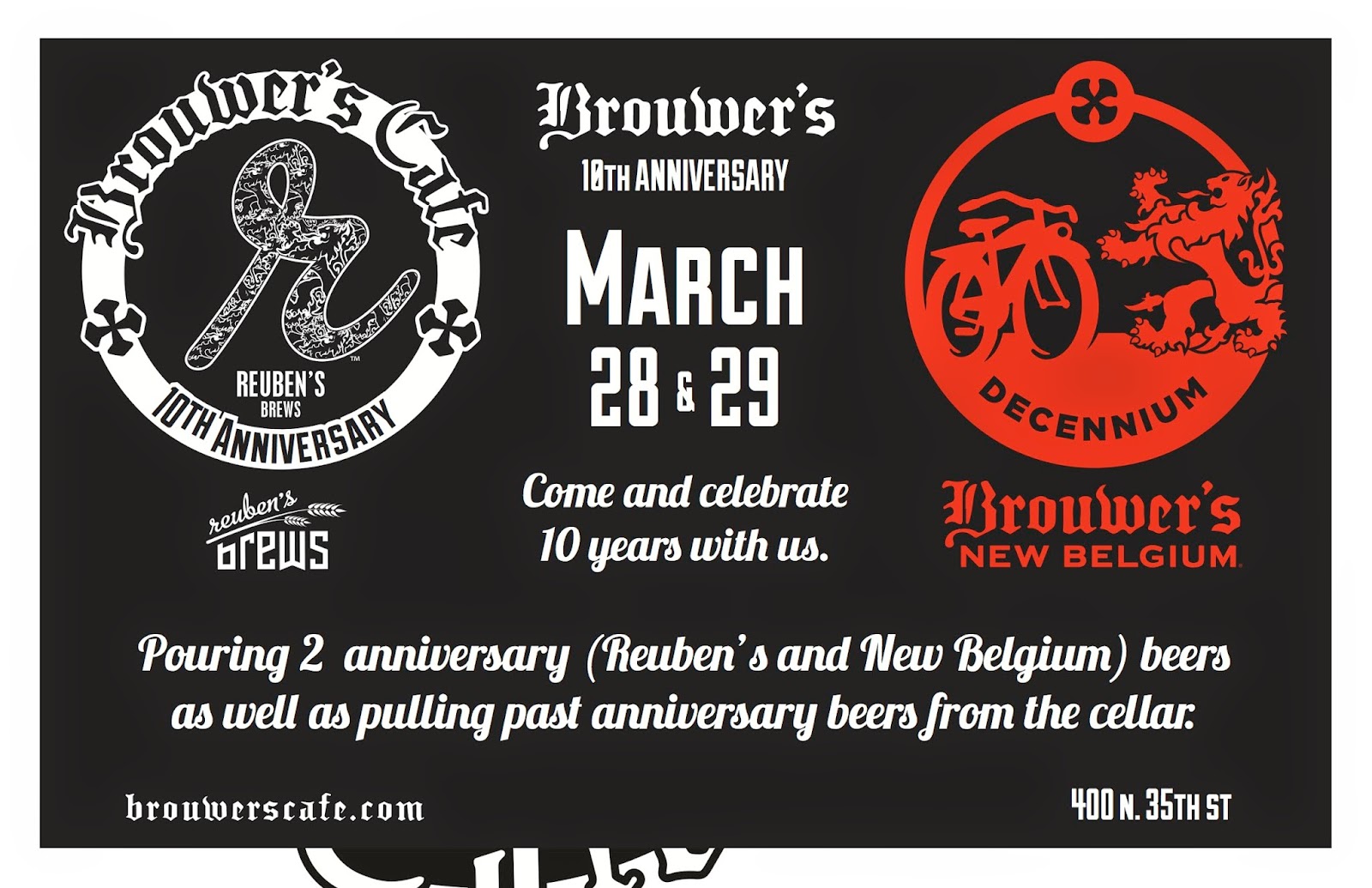 Our 10th Anniversary, on Saturday March 28th, a major milestone for us! It’s hard to believe it’s been 10 years already, or just how much Seattle and the Craft Beer Industry has changed! What were you doing in 2005? What’s your first (or favorite!) Brouwer’s memory? We’d love to know!
In honor of this 10-year milestone we have two very special beers to share with you. New Belgium was kind enough to open up their “wood forest” and allow us to blend a sour beer.  We had a great time hanging out with Eric Salazar, on a sunny December day in Fort Collins, where we tasted close to 20 different fouders. We came up with a 50/50 fouder blend we think everyone will enjoy, but this is a draft only offering.
The second beer was brewed at one of our favorite Seattle Breweries, Reuben’s Brews. Adam, Mike and Thor were great hosts and allowed us to sit in on the brew, on a sunny Monday in early March. This IIPA, appropriately named Gobsmacked (a British slang term for astonished) is a blend of Citra, Mosaic and Galaxy Hops, and it will have your lips smacking.
We are also known for hiding beers in our cellar for a future, special day, and that day is upon us! So, we’ve been digging around looking for beers worthy of our 10th Anniversary, including as many past anniversary beers (from both Brouwers and Bottleworks) as we can find. Attached is the list of the 17 beers we’ve come up with thus far, but we are shooting to put a total of 20 on draft for this event. 10 for the 10thand 10 for the next 10 years!
Anchorage/Grass Roots Artic Soiree Saison
Allagash PNC Broken Elevator
Black Raven King Dandy
Hair of the Dog Matt ’10
HUB Copperworks Gin Barrel Aged A-bomb
HUB Oola Barrel Aged A-bomb
HUB Westland Barrel Aged A-bomb
Firestone Walker Hat Trick Sour
Firestone Walker PNC Buckwheat Stout
Fremont Old Bridgerider Brouwer’s 7thAnniversary
Lost Abbey Bottlework’s XV
New Belgium Decenium Brouwer’s 10th Anniversary Sour Ale
Reuben’s Brews Brouwer’s 10thAnniversary Gobsmacked IIPA
Russian River Bottleworks IX Deviation
Stone Bottleworks 13
The Bruery Bottleworks XII
Flyer’s Brouwer’s 8th Anniversary