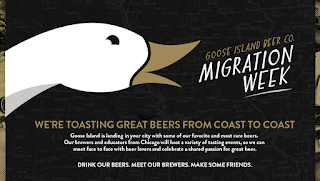 Monday, July 13th – Goose Island Migration Kickoff
If you made it last year you saw the great stuff Goose Island Beer Co. brought out. Make it down this year and taste some of the best they have to offer, and it will go fast. More details on beer line up to come, so stay tuned.
Event runs 7pm-10pm!

Usually scheduled during Seattle Beer Week, we decided to switch things up this year and host this event in July, as it’s a crowd favorite!

For those of you unfamiliar with the event the formula is simple. We invite 5 breweries to attend, and ask that each craft a special burger to be paired with 1 of the 4-5 beers they send us. Two of those beers should be less widely distributed (somewhat rare).

We have invited:
Beardslee Brewing – New brewery in Bothell, Drew Cluley who previously worked at the Big Time and won the last two years with them, moved on to this new brewery.

Big Time Brewing – Now with a  new head brewer, and owner.  The brewery has won the competition the last two years.  Now they have some big shoes to fill if they are to win for a third year in a row.

Reuben’s Brews – First time at the competition—Head Brewer Adam Robbings and company are excited  to be part of this.  I have heard that they are vegetarian—that would be a first.

Breakside – Ben Edmunds and his Portland crew have been coming up with some very creative beers, and food to go along with it.

Ballast Point – These guys have been putting Grapefruit and other spices etc in their beers for awhile now, we are looking forward to what they come up with for this event.

We’ve been known to let beers age for years in our cellar, but at a certain point they need to be consumed! That said, we think August 1stis the perfect time to pull some Firestone Walker Anniversary beers, specifically Firestone 14 through 18, which are known for the rich, deep flavors. Doors open at 11am, and $35 gets you a 5oz taste of all 5 Anniversary beers, plus a 12oz pour of Firestone Pivo at the beginning of the event.