This Monday, July 22nd we will be closed for an employee appreciation party.  We apologize for any inconvenience this may cause you.

Tuesday, July 23rd The Bruery is in town for the re-release of Bottleworks XII.  For those of you that are not familiar with this beer, here is the description of the first beer made two years ago for our bottle store Bottleworks 12th Anniversary.  If you are a fan of sour beers this is one you shouldn’t miss.

Base beer: Imperial Witbier, 8% ABV, sour mashed 1-2 days, and fermented with a blend of Berliner Weisse culture and Belgian Witbier yeast. Beer is barrel fermented in large red wine barrels (132 gal. barrels). Raspberries are added to the beer towards the end of fermentation directly to the barrel, and aged on the raspberries for a minimum of 1 month. The Berliner culture contains souring bacteria and the raspberries will add acidity to the beer. 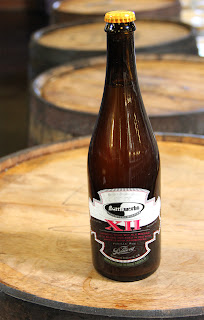 There will be events at all 3 of our locations starting at 11am when Bottleworks (located at 1710 N 45th St) will be selling bottles of the 2013 re release of this beer, there will be a 3 bottle limit per person on this beer.  They will not be pouring any draft of this beer that day.

After picking up your bottles, head on over to the Burgundian at 5pm as they will be tapping the Re Release of Bottleworks XII.  AT 7PM we will be tapping the re release as well as a few other draft options from The Bruery here including two rare sour options Tart of Darkness (a sour stout) and Sans Pagaie (a sour kriek).  Those of you that love sour beers will sure not want to miss out on trying these beers, we have very limited amounts of all 3.  Both restaurant locations will have bottles of the Re Release available for in house consumption only,  no to go at all.