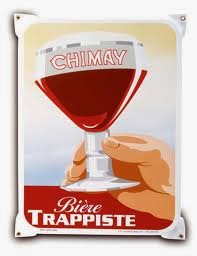 We invite you to join us tomorrow, July 9th, to drink a Chimay Red or Chimay “Première” on draft.  This is the first time that it has been available on draft in Seattle.  This is an exciting opportunity to drink a great Trappist Bier.

What follows is a blurb from their website:
The Chimay “Première” was the first beer brewed at the Notre-Dame de Scourmont Abbey by the Trappist fathers in 1862.
Its current recipe was crafted by Father Théodore when he recreated the brewery after World War II. He was directly inspired by the original recipes from the beginnings of the brewery.
We have a couple of other events coming up in the near future as well:
A night with Logsdon Farmhouse Ales from Hood River, on Tuesday, July 22nd @6pm. We will be pouring multiple vintages of Seizoen Bretta, their new Tripel, Far West Vlaming and Conversion Ale.

This unfiltered bottle of seizoen, with it’s beeswax seal, is na.turally refermented and carbonated with select yeast strains, producing fruity and spicy flavors that are balanced by hops and soft malt character. Special Brettanomyces yeast provides added dryness and crisp complexity to the Seizoen Bretta.  Bottle conditioned with pear juice for a natural carbonation.
​8.0% ABV, 35 IBU

This Red Ale is brewed in the ‘Vlaming’ or West Flanders style. A combination of pale, crystal, and dark roasted barley malt, wheat, and oats are brewed with local whole-cone hops, with a select variety of yeast and lactic bacteria. We age our Red Ale in oak barrels for a period of time to develop complex richness, soft tannins, and fruity, tart character.The agest beer is then blended with young beer to create the desired balance of malt sweetness with a dry finish.
​6.5% ABV, 16 IBU
The Conversion
Northwest Sour Ale, brewed in the farmhouse tradition opened to fermentation with wild yeast and bacteria. malt sweetness with a flavorful hop character gives way to layers of acidity and tartness. This beer represents our transition to wilds ales: tart and juicy with lots of traditional farmhouse goodness. Our conversion to the wild side.
7.7% ABV, 25 IBU
Then on Wednesday, July 30th we host the Sierra Nevada Beer Camp Across America event.  Sierra Nevada has for awhile released a Beer Camp box set, where they highlighted their favorite beers brewed at their Beer Camps.  This year instead of picking they decided that they would pick 12 breweries from around the country that they wanted to Collabeerate with and make a mixed 12 pack that would have every one of the collaborations in it.  The 12 pack is scheduled to be released in the area soon, on July 30th we will be tapping all 12 beers here.  Here just watch this trailer….

Then we are in to August!  Bring it on Summer!