We have a secret tap tonight for those of you in the know – Russian River Consecration. Ask for the secret tap!

The next couple of days are supposed to be scorching hot. So hot there has been a health advisory issued to stay out of the heat and drink beer! We’re doing our civic duty to save lives in Seattle by cranking up the Air Conditioner, and dispensing some great beers this week. Save yourself, at Brouwer’s

Happy Hour at Brouwer’s Cafe now goes from 3pm to 7pm, 7 days a week. Happy Hour consists of $1 of all drafts and well drinks, and some great specials on food like Buffaloar Sliders (Wild Boar and buffalo mini burgers). With a $1 off on our drafts you can get many domestic schooners for as little as $2! 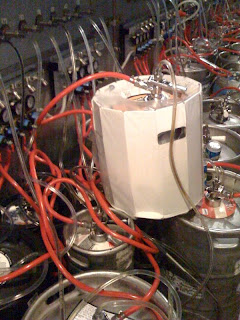 Today we just tapped our first “Beer in a Box.” It’s the new “Key Keg” system that allows us to get import beer without having to pay a keg deposit. Instead of shipping the empty keg overseas we just crush the box and put it out on the curb for recycling. This is what the manufacturer had to say:

“KeyKeg® The “sell and forget” keg

The revolutionary one-way KeyKeg®, suitable for any liquid and especially carbonated drinks, is developed according to the bag-in-ball concept. This lightweight disposable keg has been developed specially for beers and offers you extra protection, longer preservation, more sales and a clear reduction of costs.

The KeyKeg® is available in a 20 and 30 litre version and weighs only 1.0 and 1.4 kg respectively. The extreme low weight results in up to 25% more beer, wine or cider per transport and voluminous transport of empty kegs back is no longer necessary.

In export markets, KeyKeg® solves all the logistic problems connected to steel kegs, which disappear because of theft and losses. At low-volume outlets KeyKeg® provides easy use and long preserved quality after broaching.”

If these kegs work as well as they say you can expect to see more imports arriving in these. This particular keg is of the Tilburg Dutch Brown Ale, brewed by Koningshoeven.

Tuesday, July 21st, we will be tapping a Firkin of Schooner Exact’s 3-Grid IPA that has been Dry Hopping for nearly 6 months! Come join Matt, Marcus, and Heather for a pint!

So after the tapping of the Firestone Walker Double Jack over at Bottleworks @5pm,

“La Folie Wood-Aged Biere, is our original wood-conditioned beer, resting in French Oak barrels between one and three years before being hand bottled, numbered and corked for your enjoyment. Brewmaster, Peter Bouckaert, came to us from Rodenbach – home of the fabled sour red. Our La Folie emulates the spontaneous fermentation beers of Peter’s beloved Flanders with sour apple notes, a dry effervescence, and earthy undertones.” – From New Belgium’s Web Site

Just wanted to let everyone know that as usual we will be closed on the 4th of July. To fulfill your fine beer needs make sure you go to Bottleworks, which will be open, for a pint, a growler, some bottles, or even a keg for that 4th of july party.

Alright, I’m back in town and I’m ready to get everything here hammered out to keep this draft list updated on a daily basis.

While a flash website is nice and pretty, it’s just been such a hassle for us to update as frequently as we should be. So we’ve switched over to this blog format. We’ll clean it up and make it look prettier as time goes on. The important thing though is that we got the Draftlist on here now, and it is up to date, at least for now. My next step is making it so people other than myself can update it on a daily basis. Alas I’ll be out of town until next week and that will be the next update. Sorry, it’s still a work in progress. 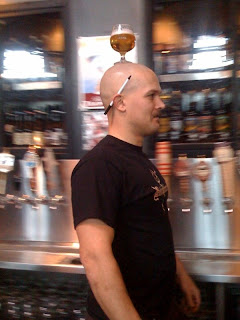 The idea is simple, keep everyone up to date with all the things that we are doing and plan to do, distribute information about beers tapped, events planned and all the fun that we instigate…all you have to do is tune in here for information and of course come on by and drink a few tasty beverages…I expect to see all of you for the BigWood Festival that starts on Thursday December 4th…