First off I would like you all to know that we have seen that folks eat a little later on Thursdays.  In an attempt to make those of you that desire eating a little later we have extended the kitchen hours on Thursday nights from 10 to 11.  Now you can all get your frites fix on for one more hour.

We have lots of events planned for the upcoming month, just about one a week, if not two, till Hardliver Barleywine fest on March 23rd and 24th.

First off we will be hosting New Belgium Brewing for a Lips of Faith evening.  We will be pouring La Folie(sour), Tart Lychee(sour), Shift Belgian Pale Lager, Trip XV ( dark Saison with date sugar, dandelions and an Orval yeast), Imperial Chocolate Coffee Stout, and two new offerings, one a collaboration with Du Decil called Heavenly Feijoa Tripel, and the second Cascara Quad an ale brewed with date with coffee and cherries added.  We hope you plan to join us. 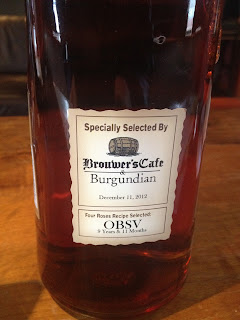 As some of you are aware a few years ago with partnered with Four Roses and bought an entire barrel and release a Brouwer’s Bourbon.  The time has come again, and we have again partnered with Four Roses and bought a second barrel, this time we partnered with Burgundian(same owner) and are releasing a Brouwer’s/Burgundian Bourbon.  The second is not quite as hot as or as high in alcohol as the first, and delicious.  On Tuesday, February 19th at 6pm we will be releasing the bourbon to the public, we plan to have a least one special cocktail.  We hope you plan to join us for this fun event.

We have a Goodlife from Bend, OR event on Thursday, February 21st @ 6pm.  We will be pouring
Descender IPA, Sweet As, Pass Stout, 29er Brown Ale and the hopefully Comatose IIPA

We have an Upright brewers night on Wednesday, February 27th @ 6pm.  We will be pouring,

We will have more information as it becomes available.