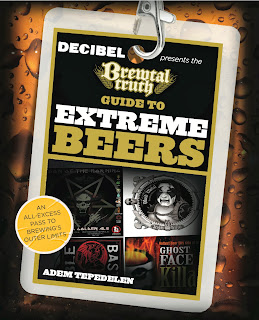 Adem wrote a book, has a blog and writes for Decible Mag,Adem likes metal music, and beer, to be exact extreme beer…Todd brews beer at Surly and happens to like metal music too, and just happens to be in Adem’s book…they got to talking and thought it would be great to do a book signing in our fine establishment.  We were  honored and more than happy to host this event.
This is a not to be missed event.  The event will kick off at 4pm on Saturday, December 7th.   Adem, will have books available for $20 that he will be signing,  metal music will be playing and Surly beer will be flowing.  It might be the first and last time that Surly pours in this market, and the day is sure to be one for the record books.  What follows is a blurb from Adem:
Former Seattle-based writer, Adem Tepedelen, will be signing copies of his newly released book, The Brewtal Truth Guide to Extreme Beers: An All-Excess Pass to Brewing’s Outer Limits, at this very special book launch. The genesis of the book began with Tepedelen’s “Brewtal Truth” column in Decibel magazine, which he has been writing since 2009. The Brewtal Truth Guide to Extreme Beers, the first guide of its type, features descriptions and ratings of more than a 100 insane beer from around the world—broken down into a handful of specific categories. These are outrageous brews with unusual ingredients, ridiculously high alcohol by volume (ABV), bizarre names and sometimes unsettling flavors.
Not only does the book focus on some of the most interesting and hardcore beers in the world, it also features profiles on craft-beer loving metal musicians and extreme craft beer brewers—including special guest, Todd Haug of Surly Brewing—making it a highly entertaining read. The Brewtal Truth Guide to Extreme Beers also draws parallels and metaphors from the extreme music scene. Each beer profiled receives an “extreme” rating, tasting notes, information about the beer and what makes it extreme, and a musical pairing selected by the author. There are also numerous entertaining and informative sidebars detailing everything from how these beers are made to the emergent trends in extreme brewing.
Tepedelen won the Michael Jackson Beer Journalism award in late 2008 and has written about metal and beer for dozens of magazines and websites including Decibel, RollingStone.com, Revolver, All About Beer, Northwest Palate and Imbibe.

Surly from Minneapolis will be joining us. Todd from Surly will be sending us a few beers to compliment the event.  Look for us to be pouring:
Pentagram
Misanthrope
Darkness
Smoke
Abrasive Ale
Coffee Bender
Furious