We are in the process of stocking for this event. If you are planning on attending please purchase your tickets at Brown Paper Tickets, stop in and purchase a ticket from a manager, or email stephanies@brouwerscafe.com. HUB will also be providing a few cases of beer just for those in attendance.

Stop by Friday April 15th and lift a pint or two in honor of our 6th Anniversary. HUB has brewed a Imperial Oatmeal Stout that will be tapped at 6pm on Friday. There will be a toast at 7pm.

We have a few upcoming events:
Wednesday, April 13th: 6PM Beer Valley Brewers Night, Meet the Brewer, Pete Ricks, and look for some special drafts.
Friday April 15th, Brouwer’s Cafe 6th Anniversary Party, HUB has brewed a special beer, a Imperial Oatmeal Stout, to celebrate our 6th anniversary, look for other beers from them as well. Brewery Representatives will be here to help with the festivities.
Saturday April 16th: Blind Lion Scotch and Cigar Night, 2 hours unlimited scotch tasting, gourmet buffet, and a cigar, this is a closed door event. Tickets through Brown Paper Tickets, or buy them here. We have added some new liquors, Mekhong Thai Rum, Old Pulteney, Balbar, Speyburn, Tulibardine 93, Abelour 90 and Eradour Caledonia 12yr.
Saturday April 23rd: New Guys Night, If you haven’t noticed there are a lot of new breweries opening in the area in the last year, we thought that it would be a good idea to host a night in their honor. Look for beers from Valhalla Brewing, North Sound Brewing, Foggy Noggin, NW Peaks, American Brewing, Paradise Creek, Emerald City, and Wingman. 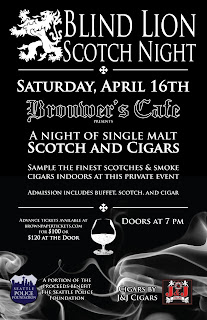 The Blind Lion Scotch and Cigar night is coming, this is a not to be missed event. www.brownpapertickets.com for tickets in advance or just stop by and get them here. They are $100 dollars in advance or $120 at the door.

In other news we have most of our Seattle Beer Week events planned:
Friday, May 20, 2011 Kulture Freaks sponsored by Shmaltz…Donny Vomit does what he does best, show starts at 10pm.
Saturday, May 21st Back in Black Stout Fest sponsored by Undeburg...starts when the doors open at 11am…
Monday, May 23rd Firestone Walker and the Homebrew Chef Sean Paxton Dinner…10 course meal with beer pairings…this is $100 dollars, tickets will go fast and are available at www.brownpapertickets.com
Tuesday, May 24th Beer and Burger Battle…HUB returns to defend their title against a great list of contenders. Each Brewery designs a burger and showcases their beer…the winner is the one that sells the most of each.
Thursday May 26th Sour Beer Fest…Just what it sounds like, starts when the doors open.

A friendly reminder to all you Scotch and Cigar lovers. We are hosting another Blind Lion Scotch and Cigar event on Saturday, April 16th. Tickets can be purchased here at the bar or from Brown Paper tickets. Tickets are $100 in advance or $120 at the door. Your entry gets you a Cigar, 2 hours of unlimited Scotch Tasting and a Food from a Buffet. This is a not to be missed event.

In other news HUB is brewing a Big Bad Imperial Oatmeal Stout in honor of our 6th Anniversary, that according to the gentleman above will “have the body of Robitussin.” We can’t wait.!!! This beer will be released Friday, April 15th at 6pm. Come out and celebrate our 6th Anniversary with us.

Another Blind Lion Scotch and Cigar night is coming up. Saturday April 16th at 7:00 pm we will close our doors for this closed door event. Tickets cost $100 and include a buffet, unlimited Scotch tasters for 2 hours, and a hand rolled cigar. If you are interested in obtaining tickets, contact Matt Bonney at mattb@brouwerscafe.com. For those of you that have not attended it is a not to be missed event. What more could you want than great food, amazing Scotch and the chance to enjoy a hand rolled cigar.

New Brew Thursday was here during Hardliver and did an interview with Matt Bonney, watch the episode below. We hope you enjoy it.